Why is it important to participate in the voting for Assembly Delegates?

It’s important that we vote for Assembly Delegates who will represent us on issues we care about and will push the CDP to follow through with their policy initiatives.

We encourage all Democrats to register for a mail ballot by December 31. Voters will receive their ballots in January, and they must return ballots by January 31.

If you like the experience of voting in person, to register for in person voting must happen by January 22nd. 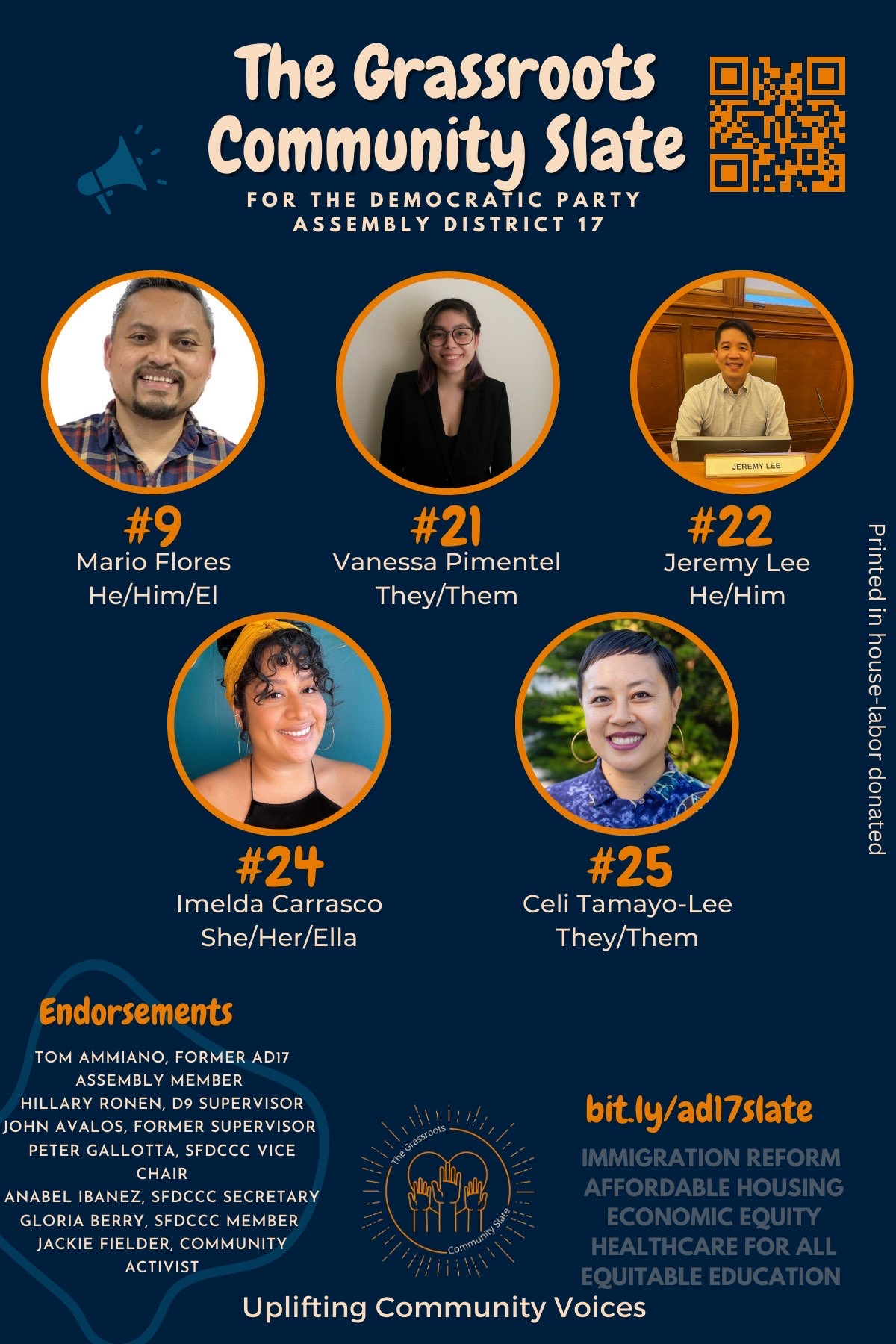 Want more information about ADEMs? Check out their website here.

Previous to each Endorsement Meeting of the S.F. District 11 Democratic Club, the Executive Board carefully researches candidates and issues and schedules interviews with each candidate. This time is no different and we spent Saturday, November 6 doing just that. After much deliberation, the following are our recommendations to our members:

Our recommendation for AD 17 Assemblymember is DAVID CAMPOS.

First a note: We reached out to each candidate 2 to 3 weeks before Nov. 6 to arrange interviews. Most of the candidates went above and beyond to fit our scheduled times. Candidate Bilal Mahmoud could not meet with us no matter how we twisted our schedules. Since he is a Democrat we really did want to interview him. He also stated he would be unavailable for our endorsement meeting on Wednesday, Nov. 10.

Thea Selby: The team was impressed with the only woman and mother in the race. The current CCSF Trustee's dynamism and laser beam focus on education, transportation, and environmental issues could not be ignored. We are happy that she took the time and trouble to run and we truly need more women to run for state offices. Currently, women make up only 22% of the State legislature yet make up over 50% of Californians. And, while it was close, we were concerned about her lack of legislative experience. Thea has enough energy and ideas for three candidates and we are hopeful that she will continue to serve the community of San Francisco.

Matt Haney also made an excellent case for himself and his progressive agenda, we particularly appreciate his previous experience on the school board. His nuanced understanding of education funding issues really impressed us. Unfortunately, he is only halfway through his first term on the Board of Supervisors and has less than half the experience of the leading candidate. Also, we are concerned about his appointed replacement on the Board. We would be quite happy with his chief of staff, Honey Mahogany, but we all know that is extremely unlikely. We believe Matt has a solid path forward once he has a term or two under his belt.

DAVID CAMPOS clearly stood out as the leading candidate. Not only does he have the most direct legislative experience of all the candidates, but he has also lived the experience of a gay Latinx immigrant who attended public schools - that is the kind of experience that provides a critical understanding for someone who will be charged with making statewide decisions on education, housing, transportation, and health care. In terms of experience, he has worked with the school district as an attorney, has two supervisorial terms under his belt and he has experience working with Democrats statewide which will be extremely helpful as he transitions from this deep blue city to a light blue state legislature.  He has innovative ideas for dealing with climate change which we, as San Franciscans and Californians, can no longer ignore as it affects us directly now. We were convinced that he was the candidate that can push his ideas forward and obtain support in the Assembly.

Scroll through camposforus.com and review his impressive accomplishments and experience. We believe David Campos will be the fighter we need in the California Assembly for All of Us.

Our recommendation for Assessor/Recorder is JOAQUIN TORRES.

JOAQUIN TORRES is the only candidate in the race but, fortunately, he is one we can highly recommend. Mr. Torres was appointed to the office of Assessor-Recorder when Carmen Chu was appointed to the Chief Administrator position. Joaquin was a D11 resident for a few years and many of the members of the S.F. D11 Democratic Club have had a chance to meet him at one time or another. Torres served as the Director of the San Francisco Office of Economic and Workforce Development since 2018. He was involved in citywide efforts to mitigate the economic hardships on businesses and workers during the COVID-19 pandemic. He is truly committed to social justice and equity for all San Franciscans.

Recall of SFUSD School Board Members:

Our recommendation is to vote NO ON SFUSD SCHOOL BD. RECALL.

This recall has qualified for the ballot on February 15, 2022. We recommend a NO vote on the SFUSD Recall. Regardless of how you feel about the board members, there is a scheduled election for those very school board seats eight months from the special election. This is a colossal waste of time and money. This special election will cost million's of dollars just to have an election in February instead of when it is normally scheduled in November. There is a move by one of the supervisors to have the City foot the bill instead of the beleaguered school district - it is still millions of dollars whether it is the City or the school district.  Parents righteously upset about the school board leadership have been egged on by right-wing forces funding recall efforts across the country.  There is an alternative, vote your conscience on November 8, 2022.

Our recommendation is to vote NO ON S.F. DISTRICT ATTORNEY RECALL

We don't know if a recall effort for district attorney will qualify at the time this was written. If it does qualify, it may require yet another costly special election. In any event, the current District Attorney must run for his office in, you guessed it, November 22, 2021. The regularly scheduled election is not good enough for the outside interests pouring money into recall campaigns to see if it will work. Don't fall for it.

11-9-21 This Just In: The Recall effort for the District Attorney just qualified for the June Ballot and we still recommend a NO vote on the District Attorney Recall. For the reasons laid out above. Once you open this door all valid elections are now subject to recalls by sore losers, a much smaller group of voters, than those who voted in the General Election. Let's not go there!