Despite repeated rounds of voting, the membership could not reach over 60% for any one candidate, Bernie Sanders & Elizabeth Warren were the top contenders with Biden following. Because this is such an important category, we will try again at the February 12 membership meeting (6:00 at Henry’s Hunan 4753 Mission St.) Please come if you are a member in good standing to vote. We can always put a sticker on our remaining door hangers with the results. In any event:

DON'T FORGET TO VOTE FOR A PRESIDENTIAL CANDIDATE

Our collective feeling is that any of the crowded Democratic field of presidential candidates is better than the one occupying this office now. Most of us have pledged to work for anyone who becomes the 2020 Democratic nominee, regardless of our leanings or support for candidates in the primary. It's that important!

San Francisco Democratic County Central Committee: This is the local governing body for the Democratic Party. Your ballot will either have Assembly District 19 or Assembly District  17 candidates depending on where you reside. Our supervisorial District 11 is split between the eastside AD 17 in red (Mostly the Excelsior and some Crocker Amazon neighborhoods) and the Westside AD19 in blue. Below is a handy map if you want to see where your neighborhood lands. 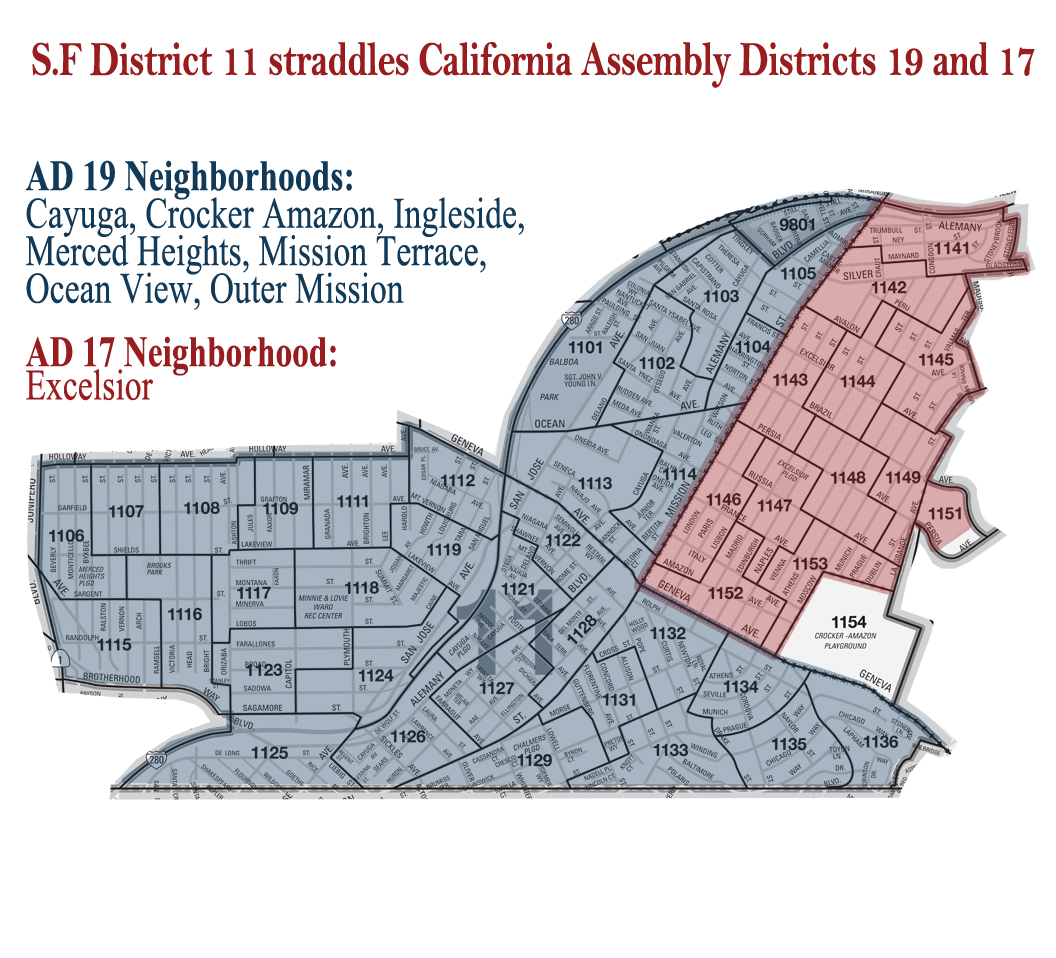 AD19 SFDCCC CANDIDATES: It just so happens that the entire Social Justice Slate was endorsed! We are pleased that our endorsements include 5 members and neighbors (underlined).

★ KEITH BARAKA: A firefighter and member of the San Francisco Firefighters Local 798. He’s running to work towards bringing back power to the people! He lives in the Merced Heights neighborhood of D11.

★ QUEENA CHEN: A San Francisco native who benefited from the public schools and services she champions today. She is a transit and pedestrian safety advocate and serves on several advisory bodies to the City. Queena is running to bring fresh & inclusive representation to the DCCC! She lives in the Ingleside Neighborhood of D11.

★ KELLY AKEMI GROTH: A policy advisor for a nonprofit working to expand access to the ballot and ensure fair redistricting. She’s running to make the party more inclusive and accessible to grassroots activists and young voters.

★ LEAH LaCROIX: A former chair of the Youth Commission and lead the charge for Free Muni for Youth. She’s running to bring youth voices to the San Francisco Democratic Party. She lives in the Ingleside neighborhood of D11.

★ JANICE LI: Born in Hong Kong and immigrated to the US as a child. Currently, she is an advocate for safe and accessible public transportation, and she’s running to build a pipeline of young, enthusiastic leaders.

★ LI MIAO LOVETT: A mother, educator, and activist fighting for access to college, immigrant communities, and housing that meets the needs of all San Franciscans.

★ FAAUGA MOLIGA: A San Francisco native and the first Pacific Islander to serve in a citywide office. He’s running to continue advocating for students and young communities of color. Faauga lives in the Merced Heights neighborhood of D11.

★ MANO RAJU: Newly elected P.D., Mano Raju, is running to bring criminal justice reform to the Party. Mano has served in the San Francisco Public Defender’s office since 2008. He lives in the Mission Terrace neighborhood of District 11.

★ A.J. THOMAS: An attorney, political-economist, a union activist, chapter president at IFPTE Local 21, and a volunteer counselor at the SF Tenants Union. He’s running to be a voice for working families and tenants.

AD 17 SFDCCC Candidates: The AD 17 endorsements were a mixed bag with some independent and some social justice slate members making the cut. There was a decided anti-electeds mood with some members loudly feeling that candidates for SFDCCC should not be in other offices.

★ DAVID CAMPOS: Current DCCC chair, Campos is continuing his fight to keep real estate and corporate interests out of the Democratic Party. He was instrumental in swinging Republican congressional districts Democratic.

★ BEVAN DUFTY: Standing DCCC member and active community member, Dufty is ready to continue his good work on the committee.

★ FRANCES HSIEH: Excelsior resident and returning DCCC member wants to continue her fight on the board to steer San Francisco in a direction that benefits everyone, not just a privileged few.

★ HONEY MAHOGANY: D6 legislative aid, owner of STUD, and current DCCC member is running for the representation of both black and trans folks on the board of the DCCC.

★ SHAMANN WALTON: Former D11 resident, Walton is tackling displacement and incarceration in District 10. He wants to continue that fight for the entire city.

★ SHANNEL WILLIAMS: City College Board President, health equity advocate, San Francisco native, and ready to get to work on the DCCC.

★ Measure A: City College Job Training, Repair and Earthquake Safety Measure If there is one thing that major unions, CCSF administration, students and San Francisco residents can all agree on it is Prop A. This proposition would create a bond to repair the ailing infrastructure across City College centers across the City. Suffering from deferred maintenance and inadequate facilities this bond will provide needed funds to put the City’s College facilities back on their feet. Most of the funding will be dedicated to building out the much anticipated Performing Arts & Education Center and the adjacent S.T.E.A.M. (Science -Technology-Engineering-Arts-Math) building. This bond will cost 1.1¢ per $100 of assessed property value. A worthwhile investment for the City's College. See more at RebuildCityCollege.com. Vote Yes on A

★ MEASURE B: Earthquake Safety and Emergency Response Bond It's not a matter of IF, its a matter of WHEN another big Earthquake hits our beloved City. A yes vote on B will strengthen San Francisco's emergency infrastructure by improving emergency firefighting water system, upgrading the 911 center, make seismic upgrades to public emergency facilities. The preparation will ensure that our city and residents get back on their feet quickly when disaster strikes. It is a bond measure and it will cost us 1.5¢ per $100 of assessed property value. A small price for a more resilient City. Vote Yes on B

★ MEASURE C: Retiree Health Care Benefits for Former Employees of the San Francisco Housing Authority This provides retiree health benefits to former employees and surviving spouses of the now-defunct Housing Authority of the City and County of San Francisco. Essentially, it is a clean-up effort that ensures fairness to a very small number of former employees. Because it is a Charter amendment, it must be put on the ballot to go before the voters. Vote Yes on C

★ MEASURE D: Retail Unit Vacancy Tax A long-overdue tax on vacant storefronts. We know in District 11 that vacant storefronts create blight and lower the walkability and work against community-building efforts.  The measure addresses long-term vacancy issues and is limited to named commercial and transit districts in the City's Zoning Use District Maps. Ground floor retail units vacant for more than 6 months (excluding active renovations are susceptible to a $250 per sq. ft. tax. As far as we are concerned this cannot happen soon enough. Vote Yes on D

Wow! Three open seats on the Superior Court. This is an opportunity to get judges who understand what everyday life is like for those of us that are barely hanging on to our little slice of heaven here in S.F.  Both of our endorsed candidates actually live in San Francisco (unlike other candidates) and they truly get it!