Membership Endorsements Are In For November General Election 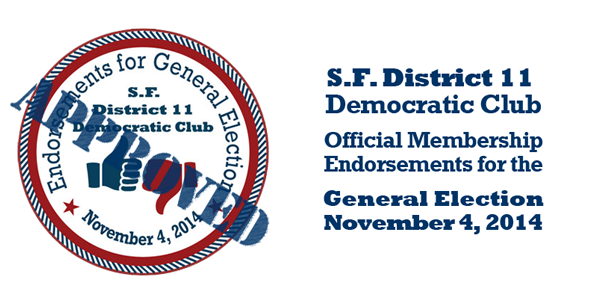 The results are in from our members on endorsements. We heard from a number of candidates and asked a lot of questions. The November 4 2014 ballot is a complicated one much discussion ensued. Afterwards, over a delicious dinner, we specifically discussed why the eboard (Executive Board) endorsed as they did, and generally, we discussed the pros and cons of all the issues. You can review the endorsement rules here, but basically all dues-paying regular members of 30 days or more were able to vote

To give some background, the eboard met with on three different days. First, there was a review all candidates that responded to our interview request, we had a separate day of interviews for the pro and con representatives for all the San Francisco Measures. Then the eboard met for a third day to hear the pro and cons on all the state measures. We did not revisit our endorsements for the primary, and a number of city offices fell under that category. Our by-laws prohibit endorsing non-Democrats, but there were very few candidates to exclude, this being San Francisco.

Here then are the results of a long and thoughtful process. I have briefly described the rationale for all decisions made for this round of endorsements. Please feel free to comment.

SAN FRANCISCO BOARD OF EDUCATION