Our 14th Annual Dinner and Auction on June 7, 2013 was not only a good time but a successful fundraiser. Every year the S.F. District 11 Democratic Club raises funds to conduct the operations of the club. We use most of the funds during general election years to cover the cost of voter information events and slate cards. We also support a Civics Scholarship at the Boys and Girls Club. We made enough to also host membership meetings on issues facing D11 residents and to outreach at D11 events such as the Mission Terrace 4th of July Party and the Excelsior Street Festival in October. 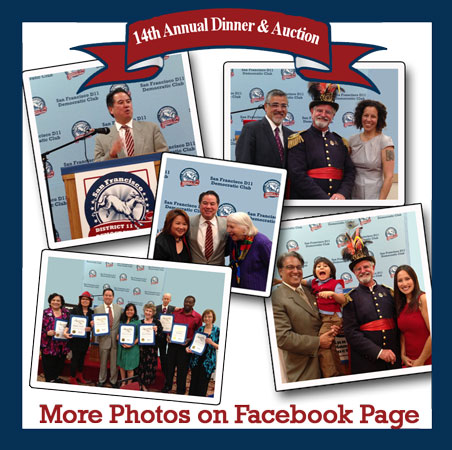 Special thanks to our featured speakers, Phil Ting, Assembly Member D19 and Emperor Norton.  Phil Ting discussed his first 6 months in the State Assembly. There are a number of budget issues that Phil is working hard on, including K-12 and higher education. He pointed out that although many legislators agree that education is the backbone of everything we hold sacred  in California, many are unwilling to support funding for public education. Phil asked for help from Democrats to hold these legislators and the Governor accountable. It was a subject that many in the audience felt strongly about and Phil reassured us of his unwavering support for education even if it comes with a cost. The SF District 11 Democratic Club were caught by surprise as Phil took the time to honor them for their work in the community and with the Democratic Club.

Emperor Norton I was quite popular with all the guests and graciously posed for pictures with anyone who asked. He gave a short history lesson on his San Francisco and reminded all of us about the $20 fine for anyone caught referring to our lovely City as "Frisco." His Royal Highness also pointed out that District 11 was part of the Bernal Land Grant and was mostly farms in his day. For those of you unfamiliar with the Emperor Norton story, I refer you to Shaping San Francisco's Digital Archives.

Sheriff Mirkarimi and his wife, Eliana, attended with a large party. The Sheriff helped out with the auction items, particularly the highly sought after Feinstein art and the Mayor's City golf balls. Special thanks to Mary Jung for her donation of a Martini set and Supervisor Avalos for his famous Dome tour, and D.A. Gascon's lunch donation. Between the live auction and the silent auction, we were able to satisfy the highest bidders with excellent gift items.

Special thanks goes out to our hardworking board members and our volunteers: Rose Ann Harris, Anthony Harris, Kelenia Olsen and Katherine Kathman for making sure we collected all the appropriate info for our filing requirements. It can get pretty hectic on the auction floor, so thank you again.

Thank you to everyone who made this another great event. See you at the 15th Annual Dinner and Auction on June 6, 2014.