Love our City? Then come hear about issues and proposals that will impact San Francisco for generations.  Issues regarding housing, education, health and labor will be discussed. If you want to get up to speed before the meeting check the links below. Every attempt was made to have pro and con representatives of the issues.  Also, a set of proposed changes to our bylaws will be presented to the General Membership for approval. At the meeting you will get a sheet with a comparison of the by laws as they are now and the proposed changes. This is an excellent time to renew your membership as fees are expected to increase by the next meeting.

City College of San Francisco was granted an initial reprieve by Judge Karnow on December 26, 2013. The judge ordered a preliminary injunction which prevents the July 31, 2014 disaccreditation of City College from occurring until a trial is held on the merits. The Judge justified his ruling by noting: “Without accreditation, the college would almost certainly close and about 80,000 students would either lose their educational opportunities or hope to transfer elsewhere; and for many of them, the transfer option is not realistic. The impact on the teachers, faculty and the city would be incalculable.” The City Attorney Dennis Herrera brought suit against the accreditation committee alleging that the Accreditation Commission evaluated City College with "unfair, biased or illegal procedures."  Basically, this injunction reassures current students and the greater CCSF community, that classes will continue to be offered in an accredited institution without fear of closure on July 31, 2014. While the merits of the case will be argued on a later date, students, teachers and staff do not need to worry about the College shutting down in the next six months.

The main City College campus sits directly in District 11. A disaccreditation would have dire consequences for not only the students, professors and staff, but also neighboring businesses. Both plaintiffs and defendants asked for more, but the Judge favored the continuation of the College rather than shutting it down in July and resurrecting it again, should the City Attorney's office prevail at trial. Irreparable harm and cost to the community and taxpayers would have resulted from a denial of the City's request for an injunction. Suits were also brought by the Teacher's Union (AFT 2121) and students at CCSF alleging similar wrongdoing. Read the SF Appeal's coverage here. For further information, download Memorandum Order CGC13 - 533693 granting the injunction.

Join us for Holiday Party 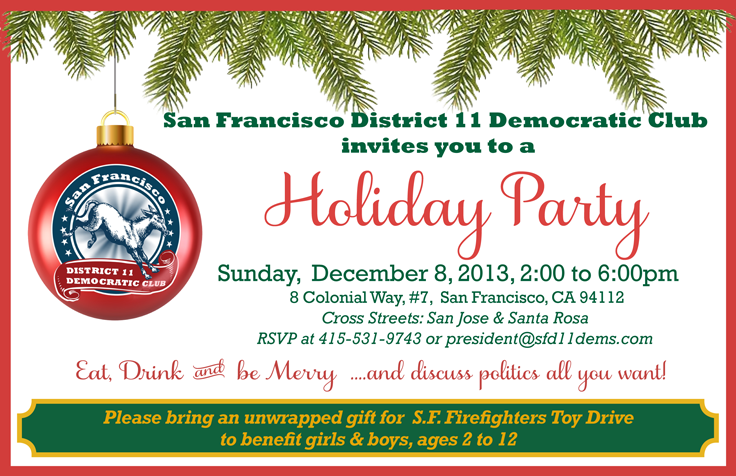 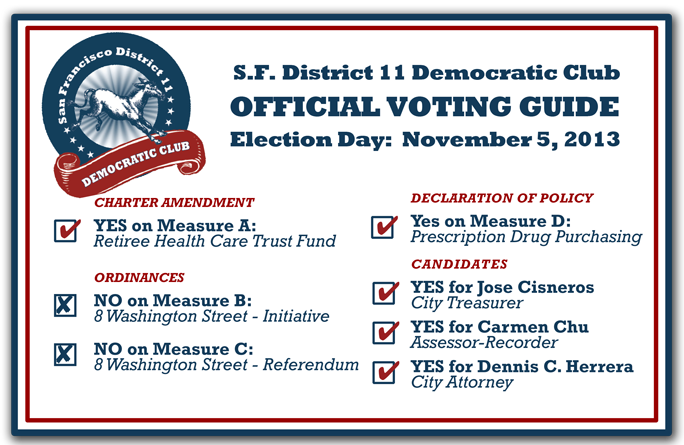 Please attend the full membership endorsement meeting for the candidates and propositions on the San Francisco November 5, 2013 ballot. Eligible members* will have the opportunity to discuss and vote on the recommendations from the SF D11 Democratic Club Executive Board.

The candidates and representatives of the ballot measures have been invited to speak between 1:00 and 1:35pm for 5 minutes each. After the last speaker on the list, there will be time for a question and answer period.

At approximately 2:00 pm, official ballots shall be distributed upon sign-in to Regular members eligible to vote. Members eligible to vote on endorsements are those Regular members in good standing or continuing members that pay their dues at the endorsement meeting. In addition, new members who have paid their dues no later than 30 days prior to the endorsement meeting are also eligible to vote on endorsements. Voting is by secret ballot and each ballot includes the choice of “No Endorsement.” A “No Position” shall be recorded when candidates or propositions fail to get less than 60% (for candidates) or 50% +1 (for ballot measures) of the votes cast.

For more information on the endorsement process, please check out our bylaws.